Posted on May 2, 2013 by Oxfordshire Family Support Network

In the last few weeks beds have featured quite a bit in my life. I’ve had lots of visitors so there has been consideration about who sleeps where, who has which bed and consequentially endless changing of bedding.

Then on Thursday the 18th of April, Storm Thorgerson , British graphic designer whose comic, disturbing, semi-surreal images for the covers of albums helped illustrate the era of psychedelic rock ( to quote the Telegraph’s obituary), sadly died.

“Victor” has always worked within the music industry in various guises and like most people who work within a particular sector he knows quite a few folks within his area of work.  I on the other hand have only ever (happily) been on the outskirts of all this, but I do vividly recall an album cover he worked on back in 1987 for Pink Floyd and the regular and sometimes frustrating telephone conversations between “Victor and Storm (as I was often the one to answer and pass the phone over)

The album cover depicted a lot of hospital beds on a beach and the album was called “Momentary lapse of Reason” and when I heard about Storm’s death this is the picture that I recalled when I remembered him. 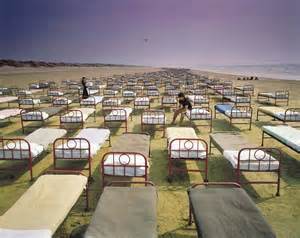 As someone who blogs about disability issues, you may be wondering where I’m going with all this, but bear with me…here’s the link….

However, this week in particular I’ve heard the term “beds” used by a number of different professionals, in different meetings, with different audiences! And each time I hear it I have the image of Storm’s beds in my head… Lots of empty hospital beds, with nothing else around them and one solitary figure in the centre!

The term “beds” was used at one meeting today to describe where people with learning disabilities have been sent for treatment (e.g. treatment centres for mental health issues or to hospitals) i.e. “we have a number of “beds” available in county” or….”there are a number of people who have been “placed” in “beds” out of county” …or “we want people to stay at home as much as possible to avoid them having to “access” inpatient “beds”

The former conjures up a vision of people being picked up and placed (carefully of course!) into a bed (and left there!?!) with the emphasis on the bed, being placed and little mention of the treatment or support or service they will receive. The latter clearly doesn’t describe someone’s home… (Estate Agents may describe it as a six bedroom home, but at least the word home will be used!)

I’m clued up enough to know that none of the people using this term saw it as anything out of the ordinary…this is what we say, the term we have always used … But I do wish they would stop and think sometimes of the implications their language has for the people they support and the people and families they work with.

I know I’m a bit of stickler for keeping it real for people with learning disabilities but for me the language we use is the key! Perhaps the professionals we work with get so stuck in their “service speak” they forget to keep it real or maybe it’s a momentary lapse and they slip back into the same old terminology without thinking. For me however, if we are talking about personalisation then the language we use has to be part of this whole agenda and I’m still not sure this has been emphasised enough!

On a positive note, G is looking for a new housemate. It’s not a positive that one of his lovely housemates is leaving you understand (although I hope it will be for her!) but rather the way the approach to finding another housemate has been taken.

I can’t share the advert (I wish I could, it’s great, but it’s private) but believe me when I say if you were a group of 3 young people in their 20’s sharing a house, sharing bills, costs etc it would look pretty much the same. The only addition is that there is a mention that these are three young people with learning disabilities, that they need supporting 24 hours a day and that anyone interested would need to contact their support provider. Oh…and there is a lovely bedroom available…not “a bed” …anyone interested will need to provide their own bed!