Tonight I’m off to spend the evening with some special ladies. We’ve been friends for years now and get together like this as often as we can, usually about six times a year (although we are in regular contact much more often than this). The evening involves food, drink (lots of it), tears, laughter and ranting! Usually about the challenges we all face individually and collectively. Mostly it’s about laughter and I always come away with a aching stomach, from laughing so much and a spring in my step from the tonic it always gives me!

We are all parents of disabled kids, all different ages and we originally met because all our kids were at the same “special” school. Six different women from different walks of life, who originally had nothing more in common than the fact we all have kids who are different too. We share a bond and have a relationship that I now can’t imagine not having and would be completely lost without.

I call them my “Lifeboat”

In the turbulent sea that is the world of disability we all, by complete chance and sheer luck, climbed into the same lifeboat and we’ve been bobbing around, clinging to each other and trying to navigate this crappy sea ever since!

All our kids are different ages, G’s the oldest at almost 23, with the youngest being almost 13. He’s the only one not still living permanently at home but will soon be followed down this path by two of the others who are in the midst of planning for a similar set up to G.

It’s rare when we meet up that one or other of us isn’t having a difficulty of some kind related to our kids. I’ve often talked about writing a book about the six of us but to be honest it would be difficult to make it believable, such is the crap that collectively has been thrown at us! But, the last six months the crap has come in spades.

In a group of only six parents, two of their teenage kids have been sectioned under the Mental Health Act in the last six months. http://alifeforjames.wordpress.com/2012/10/14/my-beautiful-son/

The latest casualty of a crap/non-existent support structure/service was just a just a couple of days ago.

When I heard the news I happened to have both my daughter’s home. After coming off the phone from one of my fellow lifeboat occupants they could see I was upset and when I shared with them the reason why they were visibly upset too. They’d both known this particular young lad for as long as they could remember, they both knew the family and could imagine the pain they were going through. They shared stories about him…the funny stuff he did and said, it made us laugh and smile, remembering a time before all this utter crap!…and I realised they and the other siblings had all been in the lifeboat with us all along.

Tonight will be an emotional night! I know we will all want to help in a positive and practical way and will all be frustrated because there won’t be much we can do except to be there for our friend. In saying this, being there, offering support is probably what we all do best. That… and drinking, eating, laughing and ranting! And I guess none of this should be underestimated.

The sea is a bit choppy at the moment…and I’m sure feels more like a tidal wave for some of us and I hate that, but I for one am glad I have this lifeboat to cling too and I hope my lovely friends are too. 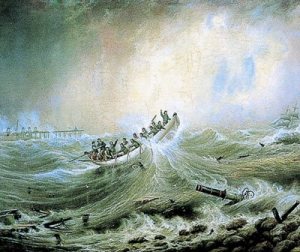 9 Responses to “The Lifeboat”